The interesting thing about social media is not just the immediate means of communicating with people locally and internationally, but you also learn more abou behavior. There are moments when things are rather serious in terms of discussion about education, politics, violence, and other hot button sorts of issues. There are also those moments, when things can get light-hearted and interesting. It isn’t all doom and gloom, and erudition. But there are times when you have to shake your head and wonder about the bravery, and cowardice demonstrated on social media platforms.

All of the above banter, though, doesn’t begin to explain my sheer frustration and anger over the continual dismissal of rape and rape victims on Reddit by some Reddit users. Here, I might as well place big red target on my chest. But, Googling Reddit and rape is illuminating, as there is a pattern of conversations about rape that second-guess survivors of both sexes. The pages of comments responding to posts is mind-numbing. I’m going to just say it–most of these posts drip with misogyny, and this saddens me. Perhaps I am painfully naive to expect more from people, but this is a serious issue. 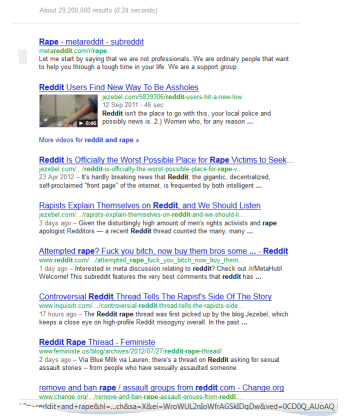 The above image is from a screen shot of a Google search Reddit and Rape from July 30, 2012. Notice that there are hits from April related to rape discussions on Reddit.

The thing that really pisses me off about the out of control comments is that some of those commenting seem to not care that the survivors are speaking their truth. And, it’s cowardly to attack the survivors, and second guess the veracity of their statements. Rape statistics are notoriously under-reported. Whatever the exact statistics are for the country, state or province that you reside in–the number is actually higher. Why? There is a still a stigma with rape and violence. And, we know that in many instances the assailant is an acquaintance, which can complicate reporting.

So, Reddit I usually don’t weigh in on my problems with some of the posts, but today I’m calling out all the malcontents and cowards who used their strength behind their monitors, tablets, smart phones to attack survivors. Daniel Tosh (will not link to him) learned that joking about rape caused a reaction–but the fact that he joked about the gang rape of a heckler also speaks volumes. Please don’t shirk that we don’t live in rape culture. We do. We see it rear its ugly head more online, though. Remember this.

Jezebel has also weighed in again and again about misogyny on Reddit. Here is a screen shot from one post last week. As you might have noticed, I have not connected to the exact Reddit or Jezebel articles. I feel like I should, but then I don’t want to send people to the site for more hits. You are free to Google the articles!

I really hope that the next time there is a discussion about violence on Reddit or other social media platforms people will think before they second-guess the survivor and say even worse. The reality is that all of us knows a survivor of violence–she or he might not have shared it with you, yet.