I was an avid FourSquare user. The platform or app is a location based and you would “check in” to different places. The goal was to become the Mayor and get free coffee, discounts, and the like.  I had free coffee at certain places, free appies or my bill was discounted. Likewise, during the holidays I would get badges for saying, “Happy Fourth of July” when I checked in somewhere. I know to those unfamiliar with FourSquare or people who hate location-based apps/games, this might seem like an utter waste of time. I began to peel the band-aid off a few weeks ago deleting certain contacts from my account. I went from some 200 to just around 130 or perhaps under. I also wondered–what was I benefiting from this? Bragging Rights to the Munchie Bar as its esteemed Mayor?! But, the app had lots of my data.

My goal then became to get to 5, 000 points and I did. Then, I thought 10,000 points and I did. I was used to the check in and frankly a part of me hoped that more establishments would use FourSquare and offer deals. That really never happened to the extent that I hoped for, but some places do offer customer benefits. I just am not at those hotels or coffee shops enough. I cracked 12,000 points and thought that maybe it was time to stop. So, on Saturday, May 26th around 2pm I deleted my account. FourSquare wanted me to really think about this, though. 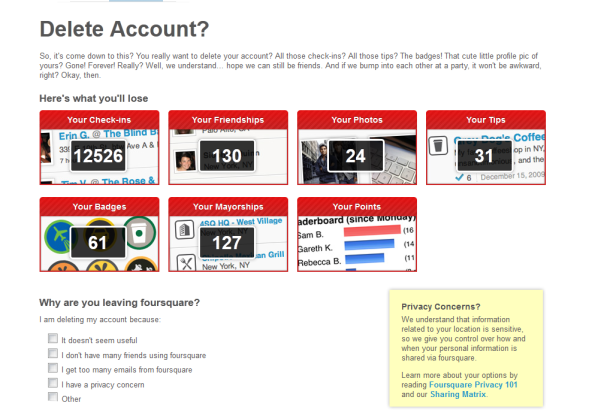 Well, FourSquare, it’s you. I think I might save a few minutes or possibly 20 minutes each day from here on out. And, you won’t get to document that I’m on 12 weeks running going to libraries or on fire with my 17 days in a row at coffee shops. I will admit that some of the badges were hilarious and maybe I should have taken some screen shots, but you know it was time to say bye. I also think that my girls and partner will smile when they hear that I deleted you. I guess I can be a little obsessive… 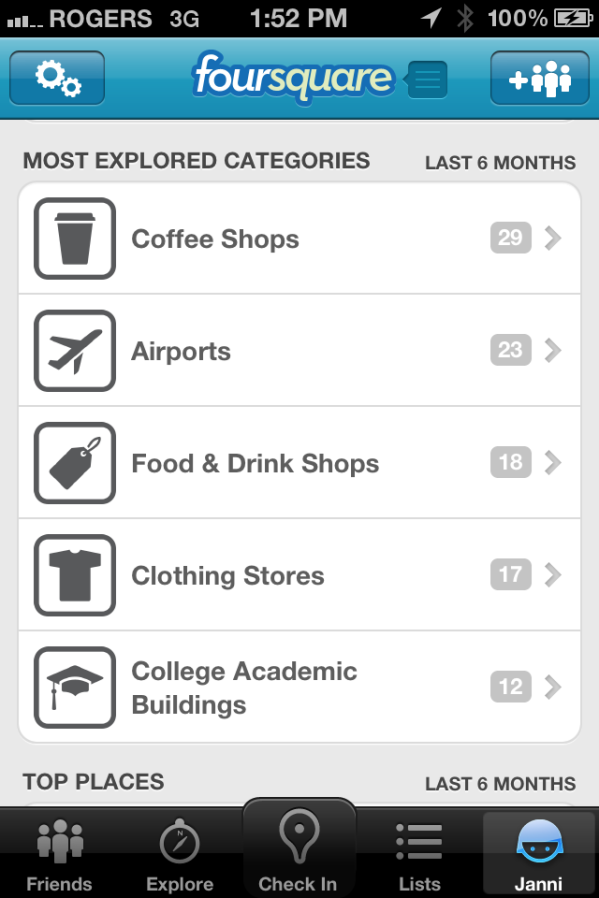 It’s been 24 hours and I am embarrassed to say that several times since I wrote this post I grabbed for my phone to check in. I definitely was power user. Now, I’ll do better things with my time. Bye Bye FourSquare–it’s me. It’s definitely me.

5 thoughts on “I Broke Up with Four Square: Don’t Judge”